When We Get Spooky

I'm on the streets, alone.
Desperately not seeking attention,
Yet I'm found.
This always happens and I won't turn it down.

A man sees me and points his camera at me.
"Can I take your picture?"
I feign a smile.
"Sure."
I go to West Hollywood every year.
On Halloween.

This year, again, alone.
Sometimes a friend accompanies me.
Many times I make new acquaintances out on the street.
I go whether anyone is with me or not.
People-watching is a pastime of mine.
I enjoy anonymity.

Another camera, and then a camera phone.
They like what I've brought to the Carnival.
I like making things doper than dope.
And not spending more than a few dollars on it.

The usuals are there.
I see a Superman, a Batman, a Flash.
I see a naughty kitten, the half-naked kind.
My eyes try not to make contact.
She looks down at her cleavage anyway.
I'm caught.
I try not to make eye contact with her and move on.
She's probably trouble.

There's usually a few people in stilts as high as 10 feet tall,
And men dressed as women.
The gay men dress in leotards and the straight men dress as buff heroes.
Many people there tonight.
Most arrived late because of work during the day.

Tonight I'm a mix of Ace Frehley, Chad Gray from the "Dig" music video, a Slipknot member, and a punk rocker.
I carried my Guitar Hero guitar with me as I walked up and down Santa Monica Boulevard.

Some people brought their children along.
Even though all the web sites and forums say not to bring them.
Maybe some people don't get the news.
Maybe some just don't care and show the world to their kids.
Maybe that's a good thing.
I wonder if I ever have children what I would do.

A black woman walking the other way from me inches closer.
She gets close and starts playing my guitar.
I smile and nod.
At least she's having fun.

A man stands out in the crowd with a Jack O Lantern bag.
He's handing things out.
I go over and hold my hand out.
He gives me three condoms.
"Be safe tonight!" he says.
I wanted candy and I'm mildly disappointed.

I see myself in the mirror of a frame store.
I've painted myself and my beard in whiteface.
The opposite of blackface, which is considered racist.
I wonder if anyone else has this thought.

A white woman sees me and makes the sound of a guitar whammy bar.
"WEEEOOOOOOOW!" she exclaims.
I don't know what to say so I smile and nod as I walk off.
What a glorious night.
I'll never get bored with Halloween. 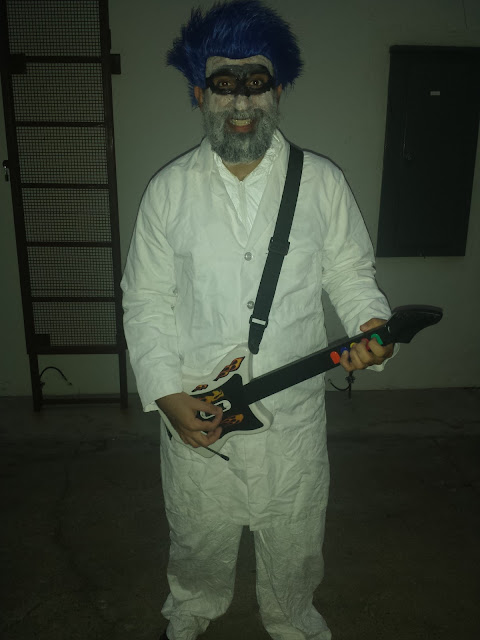